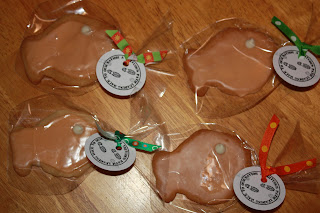 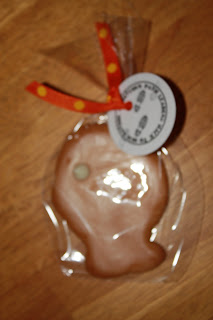 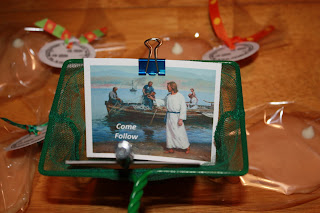 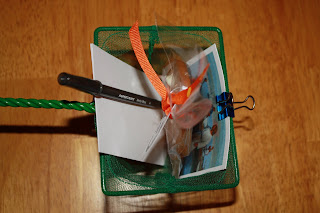 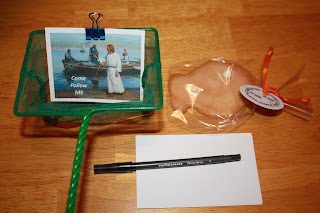 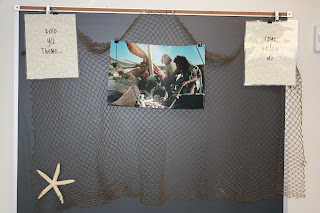 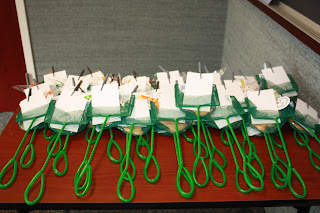 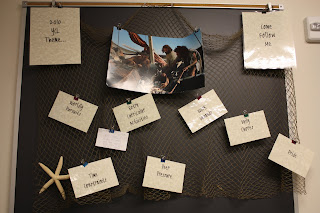 This past Saturday was our first YCL meeting for our upcoming 2010 Young Women's Camp. Our YCL Theme for 2010 is Come Follow Me.

Here are just a few things we did to launch the YCL Theme at our meeting:

2. We played a really fun game called SHIP TO SHORE. I'll post the game separately for those of you that might enjoy playing it with your girls.

3. Then, I asked the YCL's if they had ever seen a rainbow before. I asked them what kind of feelings they had when they saw it and if they ran to go get others to come and see it. Then...I talked to them about how lucky they were that they were blessed to see such a beautiful sight.

4. I continued discussing this with them and then told them that over two thousand years ago, a similar invitation was given to two men who were fishing. As Christ walked along the shore of the Sea of Galilee, He saw two brothers, Simon and Andrew, casting their nets into the sea, for they were fishermen. They said to Him, "Rabbi...where dwellest thou? And He said unto them "Come and See." This simple invitation summarizes the Master's ministry. His was always an invitation to come and see; come follow me; come unto me.

5. Today, we are given the same invitation that was extended many years ago to the fisherman of Galilee: set aside your nets and come and see. But, will we leave our nets, which are so full of other interests and everyday challenges?

6. Now it was time to ask the YCL's...what are some distractions that fill our nets or their nets?

We posted all of these up on a net that I placed up on the black board.

7. What does this have to do with camp? Well...we want you the YCL's to set your daily nets aside and fill your nets with ideas for camp and ways that you can become a leader to the younger campers. We want you to be ready to say COME FOLLOW ME. I will show you where to go. I will show you what you need to do. I will help you in every way I can, etc...

8. After this section of our meeting was over...I gave each YCL their own personal net that contained a picture of Christ walking along the Sea of Galilee, 4 index cards, a pen, and a homemade FISH sugar cookie. The YCL's then were given an assignment to work in groups to come up with a way that we could use a shoe to motivate the campers. Each YCL was to write down their own ideas on their index cards that they could share in their group and then they had to brainstorm and figure out which one of those ideas was the one they would share with the rest of us once the breakout session was over. We posted all of the ideas on our net and then took off the one's that weren't going to work and finally came up with the PERFECT idea of having a GOLDEN SHOE. I'll share more about the GOLDEN SHOE in another post.

The mini nets went home with each YCL and they will be using them at camp for some of their devotionals with the younger girls.
Posted by Jennifer at Monday, November 23, 2009 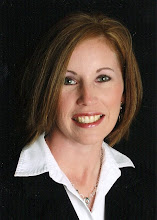 Thanks for visiting my blog! I'm a mom of three children. I love to travel the world. If you have chocolate, I'm going to be your best friend!

Please feel free to share your ideas or additional comments feel free to email me at jennifer.hawkins@hotmail.com or beehivemessages@gmail.com.
Note: This is not an official website of The Church of Jesus Christ of Latter-day Saints. 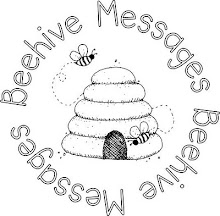 Teaching Tools for members of The Church of Jesus Christ of Latter-day Saints. 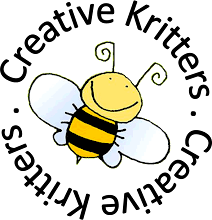 Teaching Tools for parents and teachers working with young children.

Starbound Performers - Where Every Performer is a Star!

Thanks for visiting Beehive Messages!

Check out these blogs: 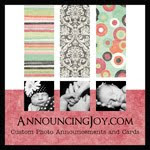